Adolph Hitler: Behind the door at no.16
written by John Murray 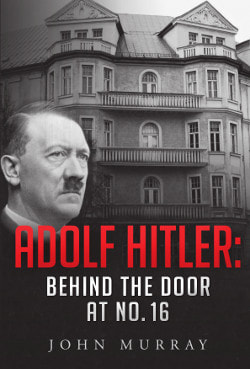 When he was Detective Inspector in charge of the South Australian Special Crime Squad, John Murray led his team into some dark and dingy places chasing some evil crooks.   Not for a minute had he thought that he would later be investigating Adolf Hitler about an unsolved mystery in 1931 in Germany.   Well, that’s what he’s done.  Well not quite.  John Murray, a retired police deputy police commissioner and lawyer, has just finished his third novel, Adolf Hitler: Behind the Door at No. 16.
It’s based on an historical incident.  The Fuhrer’s 23 year old, live-in niece, Geli Raubal was shot dead in his elaborate apartment in Munich.  It was two years before he became Chancellor, and as newspapers were reporting their relationship was highly unusual, if not sordid, it suited the Nazis to get rid of her.  They said it was a suicide, but she was murdered.  Did Hitler kill her?  Or was it one of his henchmen?
By introducing fictional characters in his novel, Murray provides the answer, and also solves other mysteries from inside Hitler’s apartment, like what was the priceless object that was stolen from his safe and where is it now?
Murray figures the best way to solve mysteries that have baffled intelligence agencies and historians for 90 years, is to give the seemingly impossible job to a retired fictional Detective John Scobie (read John Murray).  Following a trail of clues through Austria, Scotland and Germany, Scobie gets the job done, but it’s what he finds out about himself that really shocks him.
This historical novel/crime mystery - is a real page turner and is particularly interesting as it centres on an actual piece of history not many people know about.
It is in some bookshops but you can get it cheaper by buying direct from murraydymond@bigpond.com for $20 + postage.

Away from Tipperary
written by Robert Hodge 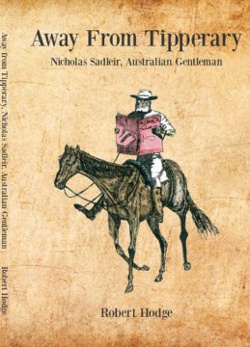 Red Hodge, a previous committee member of Books and Words Group, has published the story of his great-grandfather, Nicholas Sadleir, entitled Away from Tipperary.
It’s hard to put down this lively tale of a 17 year-old from the Irish gentry who leaves his Tipperary home in 1852 for adventure and would-be fortune in the colony of Victoria. Red tells a strong story which is rich in historic detail, humour and riveting background, conveying the saga’s context in a manner that hooks and delights the reader.
To chase up a paperback or an e-book go to: www.redhodgestories.com.au and you can read the first chapter for nothing. 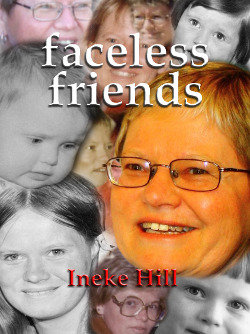 Part of an immigrant family from The Netherlands, for more than twenty years Erika experienced sexual, physical and emotional abuse from trusted loved ones. The result was an attempted suicide and three breakdowns, and a diagnosis of Dissociative Identity Disorder (D.I.D.).Thus her inner world is made up of multiple personalities (of different ages and each with partial memories and experience) disguised by a ‘spokesperson’, who deals with the outer world. Initially she found it difficult to trust people and to share her thoughts and feelings but now she is able to voice them through humour, pain and hard work. Her writing has been therapeutic and has also become a powerful tool in living and coping with ‘The Gang’.

Writing her life story, faceless friends, has provided Ineke with an opportunity to give a voice to her ever-present mental condition.
For copies email Ineke on inbazz@gmail.com

Review
This is a horror story about sexual abuse. Read this mind-bending universe aloud; from a girl whose writing describes and enables her survival. Glorious!
Henry Kristall (Psychiatrist and Artist) 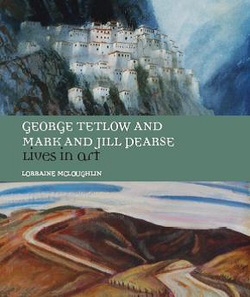 The creative arts have flourished in the Fleurieu Region, thanks in no small part to artists who have dedicated their lives to their craft. Lorraine McLoughlin’s latest offering, George Tetlow and Mark and Jill Pearse – Lives in Art is a beautifully constructed work. I was absorbed by the stories of each of these artists as they reflect on obstacles, achievements, and sources of inspiration. In conversations with Lorraine they share experiences, in particular landscapes and cultures that have found expression in their work.
The artists have all made sacrifices, enduring hardship for the sake of knowledge and inspiration. At times art has been set aside to earn an income and care for families. All three responded to early mentoring and encouragement; they also persisted during times when others might have sought an easier path.
In turn, they have inspired others through teaching, mentoring and involvement in community activities, and now by sharing their stories.


As Lorraine reminds us, art is “a way of seeing life in its reality, brilliance and depth, a way of pondering its mysteries and enhancing life in the real world.” I recommend this work to all who wish to gain an insight into the challenges faced by these artists and the contributions they have made to the art world and the Fleurieu community.
Reviewed by Janet Page
for more details about the author and the book go to Lorraine's web site
What matters most
written by Dianne Maguire 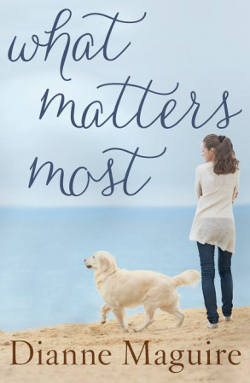 Confronting, amusing and compelling, this is a story about choices and how they shape who we become.
There is good love and bad love. Good sex and bad sex. And sometimes it's hard to know the difference.
Paediatrician and mother Mia Sandhurst is scraping to keep her marriage together after her husband of 25 years breaks her heart. Finally facing reality, Mia embarks on a series of outlandish new behaviours to make startling discoveries about herself, love and life.
But the lies and betrayal Mia endures are nothing compared to those of her 15 year old patient, Rachel Hooper.

Set on the magical coast of the Fleurieu Peninsula, WHAT MATTERS MOST is a story of love, family, misplaced loyalty and how our choices shape who we are. 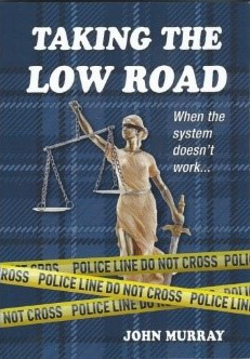 When boys are abducted from Adelaide streets in the 1980s, it’s personal for Detective John Scobie.  He sees links to the unsolved murder of his school friend Rosie decades before in Scotland. To understand Scobie, and his vendetta against sex offenders, we are taken back to his Glasgow childhood, where he was abused by men in authority, and tutored in morals by a former gangster.
It takes him 30 years to solve the mystery of Rosie’s disappearance but no time at all to do something about it.  And this doesn't involve the legal system.

A comment from someone who’d know:
John draws on a colourful Scottish childhood and a distinguished police and academic career, to produce a fast-paced novel that reflects what he does best: entertain while telling a serious controversial story that reveals the underside of two different worlds – Adelaide and Glasgow.
Peter Alexander, former President of the Police Federation of Australia

To obtain a copy email John Murray on murraydymond@bigpond.com

The End of the Road: Becoming a Mallee Wife
written by Deborah Hyde 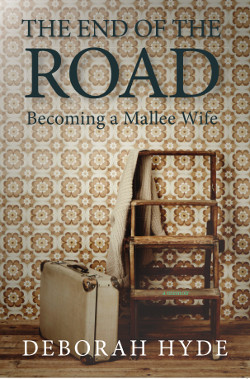 Deb has a rural background and has worked as a nurse and professional counsellor.  The family settled in Normanville 13 years ago.  “The End of the Road: Becoming a Mallee Wife” is a memoir of Deb's life, with a focus on her time with her husband Ron and four daughters on a 4000 acre farm “quite literally at the end of the road” in the mallee of SA.  When Deb arrived in this remote land as a newlywed she faced a harsh physical environment that was completely different from the relatively fertile farming country near Minlaton on the Yorke Peninsula where she grew up.  Over the years, there were many challenges, both physical and emotional.   With warmth and humour Deb shares  experiences of  family and community working together to overcome hardship and isolation. In the process they also shared joy and laughter.
Deb's memoir may inspire others to document social and family history that might otherwise be lost. She reflects: "As a result of the dwindling population and bigger farms, once thriving small towns like Meribah and Peebinga have all but died, the owners of shops, post offices, banks, teachers and workers on the railways, all long gone."
Deb’s book is available at the Yankalilla Visitor Information Centre.
- Reviewed by Janet Page 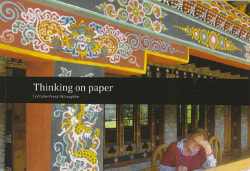 On reading Lorraine Penny McLoughlin ‘s latest publication Thinking on paper, one could be forgiven for assuming it was written this year,  during trying times of lockdowns and deprivation of travel and attendance at cultural activities. However, this timely collection of thoughtful and insightful prose pieces was written between 2016 and June 2019, following an invitation from the Victor Harbor Times to write 300 words on any topic.
Topics covered ranged from the relevance of Shakespeare in the 21st century and how exchanges about words and ideas can be life changing, to the importance of reflection, following instincts and the wisdom to tread new paths and grasp new opportunities; often in close proximity and within easy reach if only we allow our minds to perceive them.
Having inched out of our comfort zone and opened up new possibilities we never previously thought possible, it is also imperative to record your observations and experiences, thoughts and feelings, as only you can tell your story … and the combination of reflection and writing can be an enriching experience, not just for yourself but for future generations.
Thinking on paper is available for from the Fleurieu Visitor Information Centre, Yankalilla; the Normanville Newsagency; Maudie and Fox gift shop, Normanville; the Bookstop, Victor Harbor; and through the websites – www.fitzmcl.com and www.freestylepublications.com.au.
Other books by Lorraine McLoughlin are: Barbara Robertson: An Australian artist’s life, George Tetlow and Mark and Jill Pearse: Lives in art, and Elaine Haxton: A colourful artist and life.
Review by Lorraine Day 0417 856 953