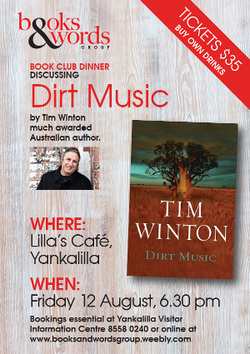 An spirited conversation was spent around the people and the plot of this book.
Part of a review about this novel from The Guardian, June 2002:
“Dirt Music is very well written. Winton has absolute command of Australian vernacular, but enough taste not to employ it as a guarantee of democratic decency. Jim’s memory of betraying his wife with an oversexed female member of the Fox clan cannot be assuaged by landing the biggest barramundi in the north; Luther’s privations won’t banish his forced recognition of the corruption of his music obsessed family. Georgie’s sisters remain in thrall to celebrity culture and nursing homes, while Georgie herself needs a harsh coup de thétre to overcome her irresolution. Over everything and everybody looms an Australia of hard options, relieved and yet benighted by technology. World travellers, beware!”
Share your ideas about this novel… or just listen to the conversation while enjoying food and drink.

tickets were $35 each (buy your own drinks)