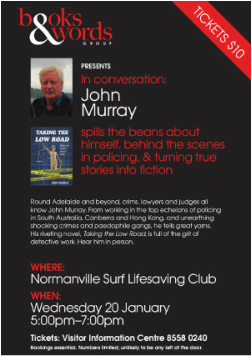 January 20th 2016
In conversation: John Murray spills the beans about himself, behind the scenes in policing, & turning it into fiction.

Round Adelaide and beyond, crims, lawyers and judges all know John Murray. From a wee Scottish-born laddie growing up in Glasgow, he rose to the top echelons of policing in South Australia, Canberra and Hong Kong, working along the way as a formidable detective unearthing shocking crimes and paedophile gangs. The stories he tells are legend but true, based on his experiences and other real events, though John won’t admit which are the ones drawn from his own life.


His riveting novel, Taking the Low Road, is full of the grit of detective work and the need to do the unorthodox when the system doesn’t bring the vilest of offenders to justice.
Enjoy an afternoon with this reputed speaker and public figure as he tells stories from his own life, and from the tragic time in Adelaide when young boys were taken from the streets by organised gangs who were hard to track and convict.
You’ll be amazed and shocked but also made to laugh, often simultaneously. This is life writing and yarn spinning at its best.